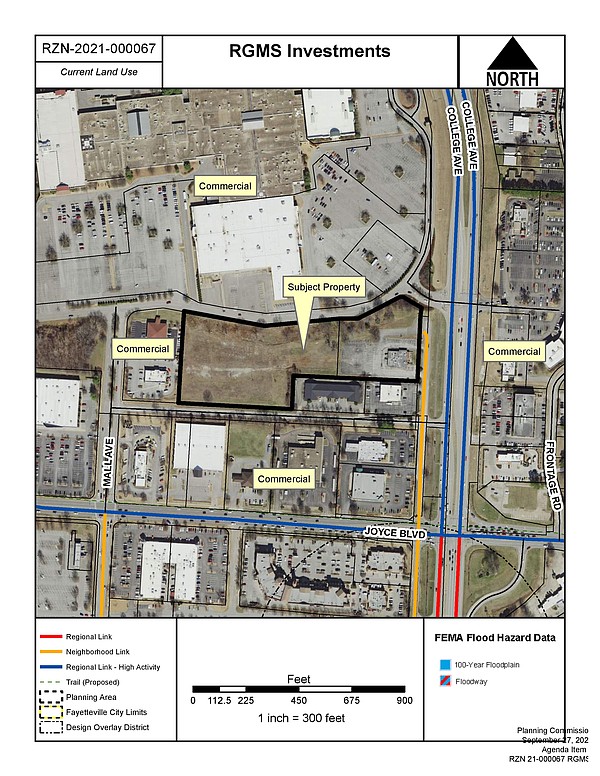 FAYETTEVILLE – The former Hooters Restaurant site on Shiloh Drive is slated to become a pedestrian-friendly mixed-use development with apartments, shops and amenities.

The Planning Commission backed the rezoning of the property 7-0 on Monday.

The 7-acre site south of the Northwest Arkansas Mall is largely undeveloped, with the exception of the building that once housed a Hooters restaurant across from Shiloh Drive. The building has been vacant since Hooters closed in 2013.

Robert Goltermann of DCM Group Commercial Real Estate Services in St. Louis, Missouri, has filed for rezoning the property for a wider variety of land uses. The property is strictly commercial zoned. The commission approved the rezoning to allow a mix of commercial and residential uses in the city’s community service district. The proposal will be submitted to City Council for final approval.

In a letter to the commission, Goltermann said the plan is to create a dense mixed-use development that will be pedestrian-friendly and attract more customers to neighboring businesses. The project would include 169 apartments, a 6,000 square foot shopping center, amenities and parking.

Goltermann said on Monday the property was under contract for a new owner.

â€œOur main goal is to activate the site,â€ he said. “As expressed, it’s somewhat run down now.”

Jonathan Curth, director of city development services, said planners view the area as an urban center suitable for the highest density type allowed. The property has no trees and is ready for redevelopment close to College Avenue, a bus stop and Razorback Greenway, he said.

â€œIt’s an area that is full of services and lacks housing,â€ Curth said.

Hoyt Perry, owner of HPerry Jewelers next to the old Hooters building, said he supports 110% rezoning. He pointed out that his company’s sewer line crosses the property and asked construction crews to take this into account and allow access to his building during construction.

The commissioners also expressed their support for rezoning. Sarah Sparkman said the request was straightforward and appropriate.

â€œHopefully that will boost development so it’s not just a run down Hooters,â€ she said.

The Fayetteville planning commission met on Monday and:

â€¢ Recommended that City Council dezone half an acre at Happy Hollow Road and Fifth Street to allow for the construction of four single family homes.

â€¢ A request to lift the 2.5 unit per acre restriction on a proposed 51 acre subdivision on Dead Horse Mountain Road was held until October 25.