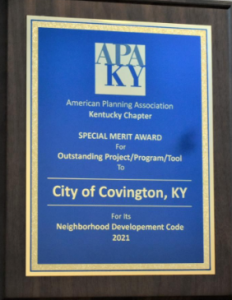 Six months after the City of Covington completed a radical transformation in its approach to land use (ie “zoning”), a Cincinnati architect emailed the historic preservation officer from the city.

â€œI wanted to take a moment to say how much we as architects appreciate the Covington Neighborhood Development Code,â€ the architect wrote. â€œWe work on projects in many local towns, townships and villages, and the Covington Code is by far the easiest to navigate, best illustrated and most nuanced. Congratulations to you and the team that developed the code – well done. “

The email message was – as they say – sweet music to the ears of City officials.

After decades of complaints about the city’s old zoning ordinance being counterproductive, rigid, confusing, and both cumbersome and expensive to navigate, “user-friendly” was the best compliment they could get.

Recently, Covington officials received yet another affirmation – this time, formal recognition – of the ease, effectiveness and innovation of the new code: the Kentucky chapter of the American Planning Association (APA-KY ) awarded the city its special merit award for a project / program / tool for the new NDC. The announcement was made at the section’s fall (virtual) conference.

â€œWe can tell from the feedback we receive almost daily from developers, rehabilitators, architects and landowners that the nearly two years of work and thoughtful discussions that the city and its many partners have put into developing the NDC were worth it, â€said Covington Director of Regulatory Services Christopher Myers. â€œGetting official recognition from our peers is the icing on the cake. Kudos to City staff, our consultant, and the many Covington residents and stakeholders who participated in the effort.

The city initiated the transition to the NDC in November 2018 with help from Kendig Keast Collaborative, a Texas-based zoning code development company. With the help of a 16-member steering committee, which dedicated hundreds of working hours, the company worked with City staff to create a set of guidelines based on Covington and hosted 20 separate events. during which she invited the public to give their opinion. The Code was adopted in October 2020.

The NDC focuses on how a proposed development fits into the â€œcharacterâ€ or historical aspect of a property’s surroundings, as opposed to its old zoning ordinance, which adhered to a rigid set of rules.

The result is clearer standards; less paperwork; an appreciation of the various businesses, blocks and neighborhoods; and a code that recognizes the city’s landscape as it moves from office towers near the river to more rural settings at its southern end.

â€œThe NDC makes it easier to invest in all parts of our city, including our historic neighborhoods, which were developed extensively before ‘zoning’ was a concept,â€ Myers said. “The NDC has made Covington even more competitive in shaping unique business ideas, leveraging our walkability, encouraging and supporting small businesses, and increasing options for attracting and retaining talent.”

In addition, the NDC has simplified and accelerated the process of approving zoning requests by allowing more staff issues and requests to be dealt with. This has reduced the number of cases requiring formal hearings before the new Architecture Review and Development Board. In fact, Myers said, the COUNCIL hasn’t even had to meet in a few months.

Moreover, the creation of this body last year was hailed as a major innovation in itself. It replaced two previous committees, the Board of Adjustment and the Urban Design Review Board, which separately made decisions on historic design and zoning, often forcing applicants to bounce back to those boards in separate meetings spread over several months.