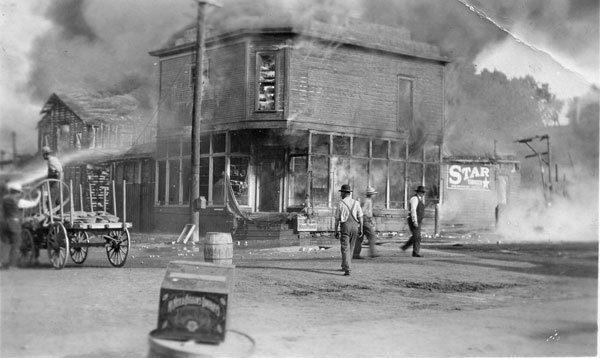 Back in the day: many affected by the fire of 1912

Thomas Curran’s loss in the “Becker Fire” which occurred on September 6, 1912 is said to be approximately $4,000. His fodder barn, which could accommodate at least 200 horses, was completely burnt down; not a plank of the building remained. He had $1,000 insurance on the north barn and $500 on the south barn.

The heat also cracked the windows on the north side of George Spangler’s house. The house caught fire several times along the roof, but was successfully extinguished by firefighters stationed there to save nearby homes. Curran’s house was saved by firefighters and citizens who threw buckets of water into it to prevent the flames from starting. After moving the household items from the houses, they placed them on the lawn south of Mrs. Susan Chandler’s residence. Fred Maeder’s house and saloon caught fire several times, but the fire was extinguished each time before major damage was done.

Several of the firefighters were burned through their rubber coats and on their faces. Harry Keegan, Fred Musselman, Joseph Jones, Otto Kundert, Emil Weiss, Robert Blumer, AE Mitchell and others were among those burned and suffered from heat blisters.

Becker was able to save about $600 worth of merchandise in his store, including his credit accounting system, a $150 weighing scale, and an expensive coffee grinder, which he moved to the stone building just across the street. north of where his store was. It opened in the new stand the day after the fire. At that time he planned to hold his store there for a while, possibly all winter, and then probably rebuild his coal and food sheds on the land where they once stood.

At this time, Thomas Curran also planned to rebuild his feed barn as soon as possible. His loss at the time would rob him of a bargain in the fair week, when he usually cashed in at least $400. The Fair Week was always “the harvest of the year for him”.

Becker had built an extensive fuel, lumber, and grocery business during the 12 years he had done business there. He had added the store to the lumber and fuel business about five years previously. He had maintained one of the best double-entry bookkeeping systems in town and trained his sons, John and Herbert, in the trade. Updated information indicated that his stock consisted of a line of groceries and paints kept in the store, approximately 250 tons of soft coal, 150 tons of hard coal, 40 tons of baled hay including alfalfa, Timothy and two types of wild hay, a small amount of oats and some ground food. John Becker was alone in the store when the fire was discovered. He ran to the shed where he saw the flames coming through the hay, then returned to the store to put the books in the safe and locked it. The books were intact when the safe was opened the day after the fire.

The praise of the work of the firefighters was heard from all quarters. It was only six minutes from the time firefighters left the downtown fire station to when they had a water spray on the blaze, according to CT Meythaler. Their main fight was to keep the fire from spreading, which they succeeded in doing. All the firefighters were tired from their hard work. Becker and Curran were particularly candid in their thanks to firefighters and citizens for the excellent service rendered. Among the many strangers who helped the firefighters in any way they could were Hannaway and Fosser, two members of Monroe’s ball team, who worked like beavers.

Two United Telephone cables, carrying 170 wires, were burned in half. This knocked out about 100 phones in the southern and eastern parts of the city. The cables had to be spliced ​​so that all the phones were working by noon Monday. Some of the phones were even supposed to work on Sunday evening. Two telephone poles were also set on fire; all Bell toll wires leading to Monroe from Janesville, Brodhead, Shullsburg, and Darlington were cut by the fire. These were repaired the day after the fire. Monroe Electric lost a meter and two poles.

The six horse heads that burned in Curran’s barn were tied to the west end, preventing them from being pulled out before the fire got too hot. Edward O’Neill and George Kirk of Chicago, who were visiting Currans, managed to squeeze out five teams that were tied at the east end. One of these teams belonged to Matt Elmer, who lived near the Junction House. The horses, unfortunately, ran into the building and were killed. John Cross of McConnell, Illinois, who was hauling wheat to Monroe, lost the other team. Becker also lost a mare and a foal in the stable fire. Many commented on how lucky it was that it didn’t happen the following week during the fair as Curran’s barn would have been filled with horses that would have perished in the fire.

The last episode on this fire and the reconstruction will appear next week.

— Matt Figi is a Monroe resident and local historian. His column will appear periodically on Saturdays in The Times. He can be reached at [email protected] or 608-325-6503.